Firstly, our hearty congratulations go to both Lynda Simpson and Shirley Price for reaching the final of the Grant Thornton sponsored Island championships played at Douglas GC on Sunday. They both put on a tremendous display of competitive matchplay golf with Simpson’s Curtis Cup experience helping her win 5 and 4 to add the Island title to her recent Castletown Club championship victory. 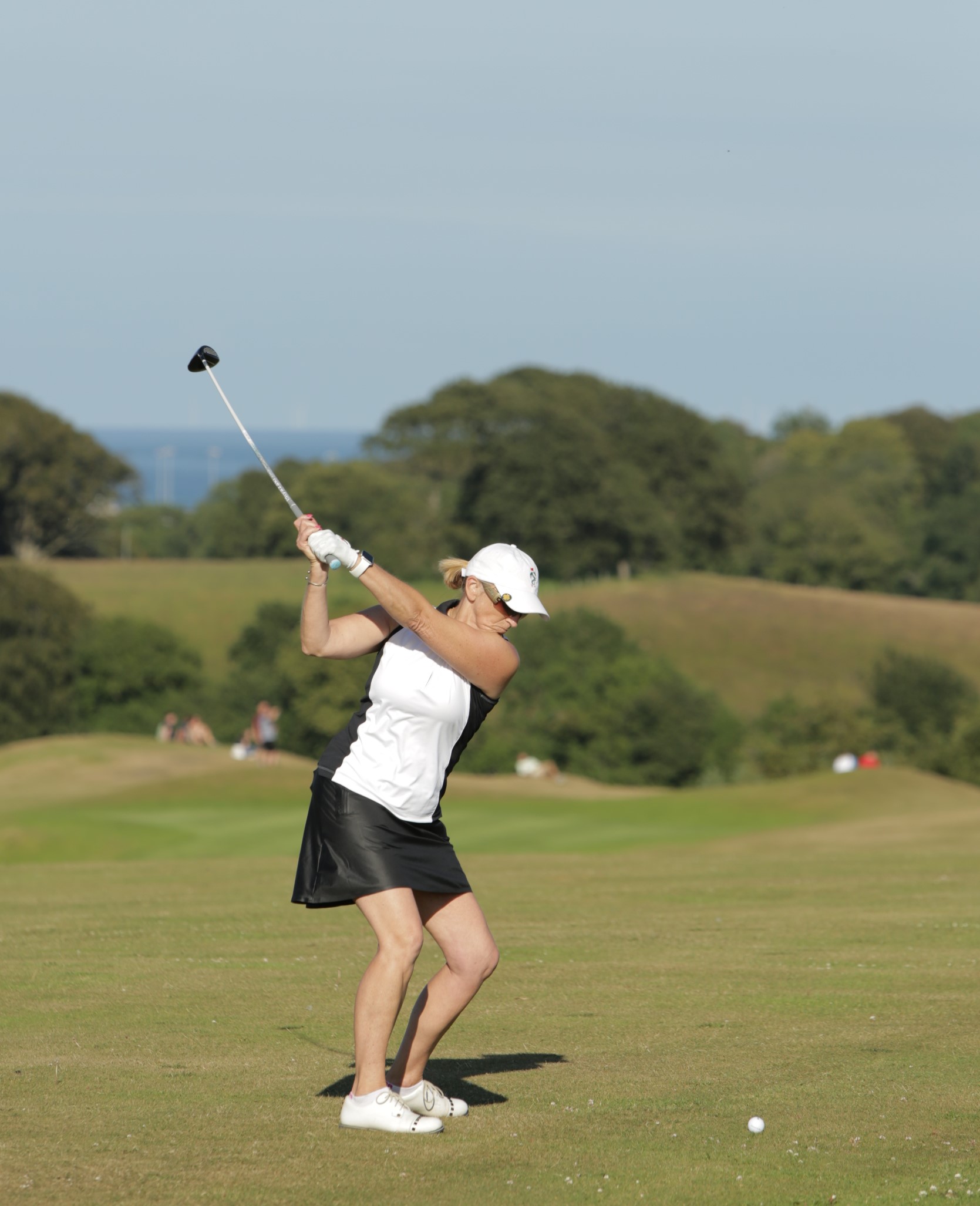 (Lynda hits her final and winning approach into the 14th hole. Photo courtesy of Andi Howland)

At Castletown Golf Club on Saturday 123 members supported our vice-captain Graham Harris who generously sponsored a mixed tees Stableford. The splendid new trophy was won by Pete Thomas (8) who plotted his way round in five over par in the challenging conditions. Four birdies, seven pars, six bogeys and a slippery seven on the longest drive hole, the 11th, all added up to 41 winning points after the two shot white tees allowance.

Second placed Gez Bradley (2) was a model of consistency with 20 points on each half. His luscious level par round included three birdies which were cancelled out by a bogey on the 9th and a double bogey into the teeth of the wind on the not so short 16th.

Finishing third, and on countback having the best gross score, Jon Corke (1) also went round in level par 72 worth 39 points. Two of his three birdies were on the run-in which was only blighted by a bogey on the 11th, but his two on the 13th won a prize.

Iain Quine (7), the best nett prize winner in the second round of the club championship, was level par after ten holes then six bogeys and a triple bogey on the 17th took him out to eight over for 38 point and fourth place. There was a three way tie for fifth place on 37 points. Richard Creamore (8), Gareth Morris (6) and Steven Boyd (3) were the card play-off participants and finished in that order.

Another countback was required to determine the yellow tees winner as both Adrian Copley (10) and Peter McKenna (23) scored 35 points to finish in ninth and tenth place respectively. Interestingly, they both bagged an eagle. Copley’s coming on the 10th and McKenna’s rare six pointer nett hole in nought came via the left bunker slope on the 15th.

Two other players also get a double dollop from the 2’s pot. The captain’s grandson Callum Brookes (29) opened with an eagle and Tom Collister (14) copied Copley on the 10th. Mr Vice added some spice by having NTP competitions on the 8th and 13th as well as a big hitter’s prize on the 11th. These were won by David Campbell, Jon Corke and Guy ‘The Gorilla’ Murray.

Earlier in the week Andy Lagden (7) landed the ‘Flowerpower’ sponsored Stableford with 40 points closely followed by Scott Donald (4) and Lee Coxon (12), both of whom stepped in with 39.

This coming Thursday MAC Financial is sponsoring the IOM Business Golf Championship (FBBB). A full field of 84 players will be competing to win prizes which include a pair of weekend passes to see the final two days of the 2020 Open Championship at Royal St George’s GC in Kent.

Saturday sees us compete for the Woods Cup which is a bogey competition that had been postponed due to inclement weather earlier in the year.