With six gross pars, eleven nett pars and only one nett bogey David Laughlin (20) won the SMP Partners monthly medal at Castletown Golf Club on Saturday. His 87, nett 65, was two clear of the field and, being the latest in a line of consistent performances, Laughlin’s handicap has dropped by three shots during July.

Another player enjoying a rich vein of form is Ian Souter (11) who is on his way back to single figures. Having expended most of his handicap Souter clicked into gear with a remarkable one under par back nine. There were two missed but makeable birdie putts in his countback friendly 80, nett 67, for second place.

Three other competitors scored nett 67s. Warming up ahead of his first-round knock-out victory in the Grant Thornton Island Championships, PJ Vermeulen slugged his way to third place with a gross 74 off the back tees despite a bunker causing a sinful seven on the 2nd.

In fourth but taking the day’s best gross prize with his lovely level par round Michael Charmer was less lucky on Sunday. He lost 2 and 1 to Tommy Fenlon in the championships.

Conversely, having set a new black tee’s course record of 69 when winning the midweek medal Andrew Challenor fared better on Sunday. Chal triumphed 5 and 3 against John Oates who had shot a nett 73 in Saturday’s medal.

Dispatching Mount Murray’s Gary Corlett on Sunday, Tom Doyle took the fourth nett prize in the medal with his 73/67 and purloined a portion of the two’s pot for his accuracy on the 13th.

Ben Smaller is back in form taking the fifth nett prize with his 77/68 helped by a birdie on the 3rd. Also posting nett 68s Dan Williams just edged out Angus Alexander by half a point on countback for the final nett prize.

In all there were 16 twos on Saturday and a couple of players qualified for a double dollop. Pete Thomas tapped-in on the 8th and 13th whereas Andy Lagden achieved a nett hole-in-one on the Road Hole. Playing off the yellow tees, just for a change, Lagden also posted a new course record of 82.

Earlier in the week Olga Whamond won the Smith Trophy event with an impressive 41 points. Julie Amphlett was second with 33 and Shirley Price took third with 30 points. 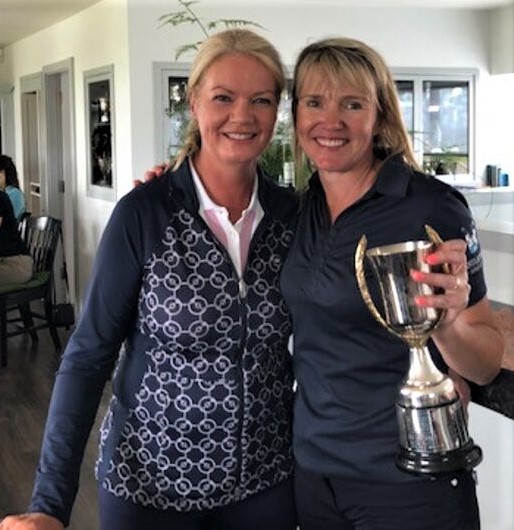 On the previous Sunday there had been a splendid turn-out to support Maryann Dunn in her Captain’s Day Stableford. Bronnie Raatgever, shown above with the captain, took the top prize with 42 points. Claire Walker was second on 40. Paula Westerman won the (36-54) handicap section on 38 points and Michelle Bowen collected the third-place prize with 34 points.

This coming Friday morning a vets team will be travelling to Ramsey GC whilst Castletown hosts the popular Nations Cup with the course closing at 13:00 for the shotgun start.

On Saturday 46 teams have so far signed up for the US Masters Texas Scramble. The winning team will be funded for the final being held at Carus Green GC in Kendal in September. The winners of that event will be jetting off to see the Masters in 2021.