Andy Lagden (5) already holds the yellow tees new course record of 75 which he set last month. Playing off the white tees on Saturday he motored away from the field ‘enroute’ to a 66 to win the top nett prize in the SMP Partners sponsored monthly medal. Lagden was two under before he went off-roading on the 5th. Then he bogeyed the next drifting to one over where he remained thanks to cruise control golf from thereon in.

Commonwealth Games shooter Trevor Boyles (12) has not taken long to settle in since joining us in June. He came second in a mid-week Stableford in July and on Saturday he shot 81/67 for another podium place. In addition, playing target golf on the 8th gave him a share of the two’s pot. 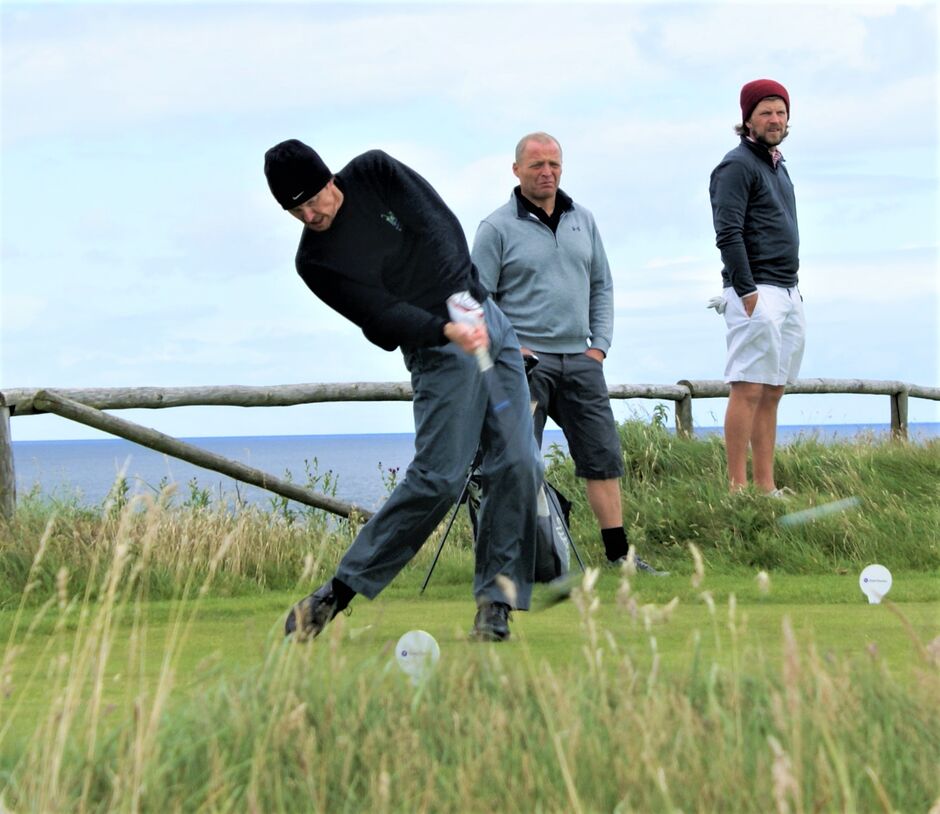 Andrew Challenor (+1) - shown above with former Island Champion Daryl Callister - started and finished his round with birdies and went on to win the best gross prize for the second medal running with a splendid three under par 69. Chal’s only bogey, on the Road Hole, was soon cancelled out by a birdie on the 9th. Another followed on the 12th.

In contrast, Simon Murray (6) managed to muck-up the 12th but immediately bounced back with his second birdie for a lucrative two. His 77/69 placed him third in the nett prizes just ahead of Neil Cartwright (10) on countback.

There was a five-way tie for the final two prize places on nett 70. Tim Callow (19) just edged out Colin C Magee (13) with Gerry Ganly (16), Peter Easthope (6), and Duncan Donald (11) the unlucky losers. Stuart Brawn (18) was the first player home in the senior section with 90/72 off the yellow tees. His playing partner Alan Harding (17) would have shot the same but suffered a septuple bogey after bunker blues on the 12th.

40 players representing five clubs assembled on Thursday at Castletown for the second leg of the Senior’s Combined 4BBB team event. The home club had a slender one Stableford point lead over Mount Murray GC following the first round held at Ramsey GC in late July.

In challenging conditions Rowany GC were the worthy winners on Thursday but second-placed Castletown consolidated their pole position with a cumulative score of 324. Mount Murray finished second overall on 320, with Peel, Ramsey and Rowany on 309, 299 and 286 points respectively. The format proved popular and the organisers - Michael Kelly (Peel GC) and Graham Harris (Castletown) – are looking to expand the event next year.

This coming Saturday our vice-captain Gez Bradley is generously sponsoring a new competition and trophy. So far 108 players have signed up in support.