LONGEST DRIVE AND THE VC TROPHY FOR BRIAN KELLY

Not content with launching the longest drive on the 11th Brian Kelly (16) went on to lift the VC trophy sponsored by Castletown’s vice-captain Gez Bradley. Kelly’s eye was in early with four pointer book-end birdies on the 1st and the 9th. These counteracted back-to-back blobs on the 5th and the 6th so Kelly turned with 18 points. Completing the course with five pars and four nett pars Kelly accumulated 41 winning points. 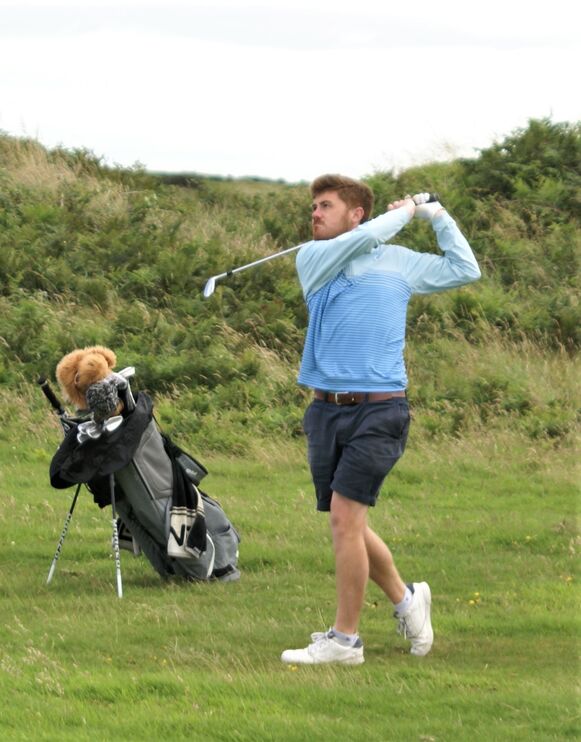 Despite four bogeys the island champion Jon Corke (+2) went round in one under par to secure the best gross prize with 71 off the black tees. Corke’s five birdies and two nett birdies from his four-shot allowance gave him 39 points in the Stableford.

An ugly eight on the 7th and ending with a double bogey failed to faze second-placed John Byrne (12). He bagged 13 of his 38 points over four glorious holes which included a nett hole-in-one on the 16th. He didn’t win the nearest-the-pin prize which went to Wayne Egerton later in the day.

Dave Quayle (4) took the third podium place on countback against Bryan McMahon (11). They both carded 37 points but McMahon N/R’d the 13th whereas Quayle tapped-in a three pointer two.

There was another card countback for the final Stableford prize position. Martin Derbyshire’s (14) four pointer birdie on the 10th made the difference in his back nine biased 36 points against Stuart Butler (18) who had motored into an early lead.

Early starter Michael Charmer almost holed his second shot into the 6th to win the nearest in two prize. This was mightily impressive as most of the field failed to reach to green against the punishing prevailing wind. 2019 island champion Jamie Arneil got off to a slow start with just three points over the first five holes, but walked away with the best visitor’s prize after dropping just two shots from thereon in.

Four birdies and only three bogeys enabled Stephen Jeffers (3) to win the midweek Stableford with an impressive 42 points, two clear of Claire Walker (30) and four ahead of Andy Saunders (14) in third. 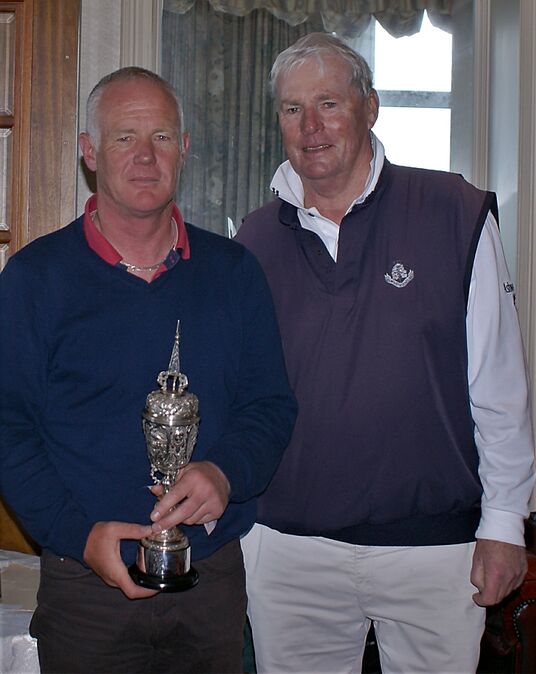 This coming Saturday Aon Insurance Managers sponsor their Aon Trophy Stableford which will always be associated with their former managing director and past captain and president of the club, the late and great Mike Henthorn shown above with the 2012 winner Billy Hare.