Two players carded 42 points and it went down to a last six holes countback to decide the winner of the Aon Insurance Managers sponsored Aon Trophy at Castletown Golf Club on Saturday. Both Bryan McMahon and Chris Westerman had scored a perfect 24 points after the first nine holes and then came back with a regulation 18 on the inward leg.

The last gasp victor McMahon (12) birdied the opening hole and bogeyed the short 8th to turn at luscious level par. His more pedestrian back nine contained six bogeys which were separated by three pars from the 12th to the 14th.

Westerman (21) had flown into the lead after a nett eagle on the 11th followed by a nett birdie on the next. An unfortunate N/R on the 17th cut Westerman’s lead to one point which he lost on the last after a dreaded double bogey.

Michael Katkjaer (12) birdied the 3rd and turned with 20 points to which he added 21 more by striking seven straight pars, five of which transformed into beautiful birdies for his third-placed 79/67 for 41 points.

In fourth place the smooth swinging Melvyn Todd (13) certainly swung with ease into the breeze. He was rewarded with nine pars and eight nett pars for 81/68 and 40 points. Gareth Morris (8) stepped in with 39 points to take fifth place but it took a seven-way card play-off to sort out sixth place. In the end ex club chairman Simon Willoughby (14) got the nod over Duncan Donald, Keith Featherstone, Chris Howland, Ben Smaller, Damian McGuinness and Richard Connolly. They all carded 38’s.

In the ladies Leighton Cup played on Wednesday Jane Holt (19), who last month secured second in the Norma Loundes open, went one better this time by beating Michelle Bowen (35). They both posted 39’s and the result had to be decided on a back six countback. Linda Fisk (26) finishing third on 37 and Lynda Simpson (5) registered the lowest gross score with an eight over par 80 for fourth place and 34 points.

The men played their own mid-week Stableford which was won on countback by Peter Easthope (5). His 37 points was slightly more back-end biased than second placed Rick O’Donnell (16) who had two double bogeys in the last six holes. The island champion Jon Corke (+2) went round in three over par off the black tees to take third place on 35.

On Friday 25 September the annual Battle of the Captains Charity Day takes place with a shotgun start at 13:00. This four person AM-AM Stableford is being sponsored by Dawn and Guy Sissons from Manx Medical Imaging and will benefit our captains’ chosen charity which is the Manx Stroke Foundation. There are still spaces available and raffle prizes and donations will be welcomed.

This coming Saturday sees the next in the monthly medal series which is now sponsored by Suntera Global after the recent rebranding by SMP Partners who decided it was appropriate to recognize the revitalized nature of their group by choosing a name which, ‘combined the energy of the sun and the grounded reality of the earth’. 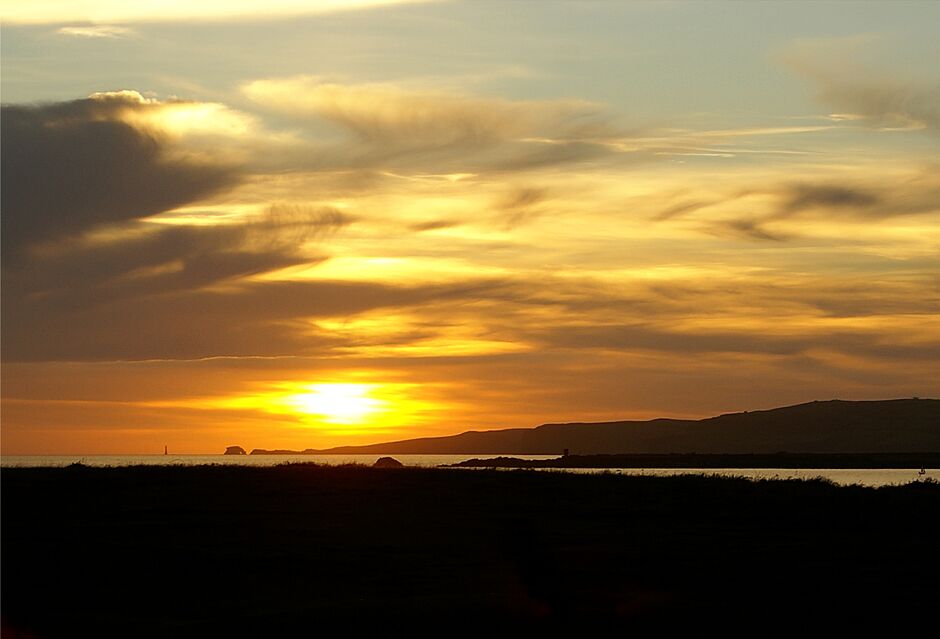 This brought to mind my photo of the sun setting over Drinking Dragon Rock captured one evening from the 15th fairway.