SUCCESS FOR SAUNDERS IN THE SUNTERA MONTHLY MEDAL

There were mixed fortunes in the Suntera Global monthly medal at a blustery Castletown Golf Links on Saturday. The rough had been cut but nearly forty percent bailed out with an N/R and almost a fifth of the field failed to finish the 18th. One determined fellow did it, but in a dozen dinks.

At the other end of the spectrum sixteen percent were able to meet or beat their handicap and the first three were in the 60s. Top of the lot came Andy Saunders (12). His splendid 80, nett 66 after the two stroke white tees amendment, included nine pars and a rewarding two on the 13th.

Frankie Doherty (8) who back in July won a mid-week Stableford with an incredible 47 points, dropped just five shots on Saturday on his way to second place with a super 77, nett 67 after adjustment. 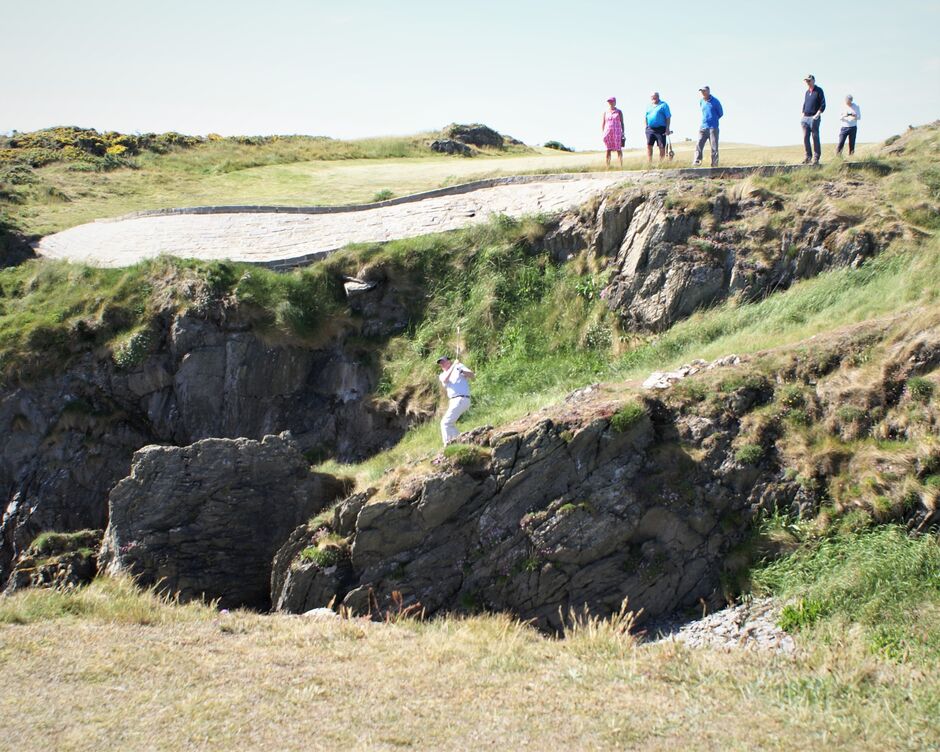 Captain Graham Harris (10), shown above, was in the lead at just six over par with two holes to go. A bogey, double bogey finish left him on 81, nett 69 after adjustment, which dropped him down to third spot.

One point back on nett 70 there was a three-way tie for the other place prizes. The recent runaway VC Trophy winner Brian Kelly (14) shrugged-off the resultant four shot reduction in his handicap to head the card countback. He compiled a better back six than fifth-placed Ash Sansbury (10), who in turn enjoyed a fractionally superior back nine to Gerry Ganly (15), although they both double bogeyed the last.

Five players, including club president Sam Skelton (5), shown above, finished just out of the main prizes on nett 71. With three birdies in the bag Skelton stood only two over par with one hole to play. Alas, his errant tee shot on the 18th led to an ugly eight.

On 86, nett 71, Andy Dent (11) similarly drove OOB on the 18th and signed for a ‘snowman’. His only consolation was that on countback for the lowest gross score from the black tees he beat Mark Teare (5) who dropped six shots over the last two holes.  White tees new course record holder Andrew Challenor (+1), makes a habit of winning the best gross score prize and did so again on 73.

37 players took part in the mid-week Stableford which ended in a three-way tie on 40 points. Stuart Campbell (13) just pipped Pete Thomas (8) and Andy Walker (17) who finished in that order. Julie Amphlett (18) was the first lady home in fifth place on 39 points.

Congratulations go to George McArdle and Wayne Egerton who won the final of the Steve Bradshaw knockout 4BBB 3 and 2 against Neil Cartwright and John Ledwidge. From two up at the turn Egerton closed-out the match with a 15 foot birdie putt on the 16th. 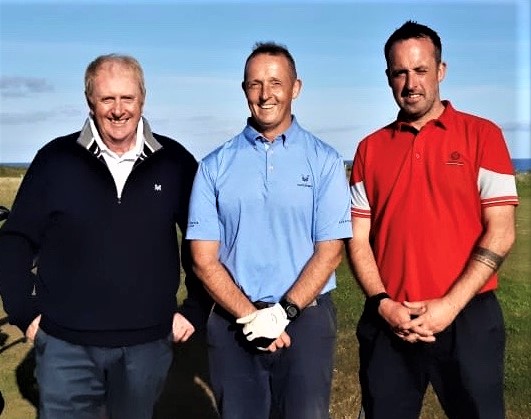 Watched by a dozen or so spectators the captain also refereed the final of the Willie Kirkpatrick men’s knockout final in beautiful calm conditions at Castletown on Sunday. David Quayle (4) (centre) birdied the 3rd and was 6 up at the turn having dropped just on shot to par. His opponent Ross Mulligan (6) battled back to win the next three holes but the match ended 4 and 3 on the 15th when Mulligan failed to match Quayle’s par.

The lady captain Maryann Dunn refereed the Barker Knockout final which also finished 4 and 3. Despite a four shot allowance Heather Skinner was unable to overcome the consistency of the worthy winner, long hitting Shirley Price (shown above).

Lady members are reminded that their end of season dinner and prize giving event is scheduled for Wednesday 14 October. The men’s annual dinner on Friday 23 October is now sold out.