MICHAEL McCORD - THE FIRST OF FOUR TO FINISH WITH 43 POINTS

Carding 43 points is rare enough so having four finish on the same score is somewhat unusual. That is what happened at Castletown Golf Club on Saturday. 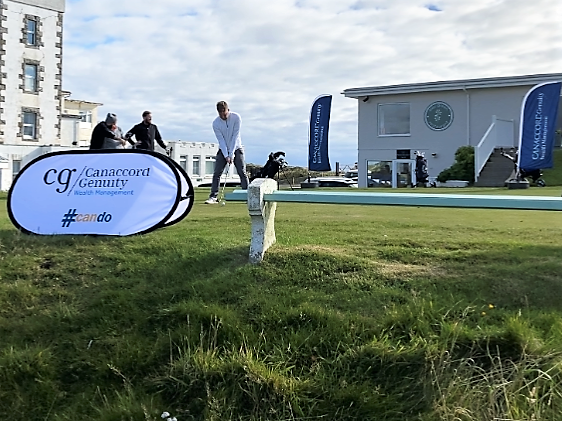 127 members turned out for the rescheduled Canaccord Genuity sponsored Stableford and the calm conditions enabled a third of the field to meet or beat their handicap.

Finding almost every fairway and purloining putts from all angles the countback winner Michael McCord (13) played perfect par golf from the 8th through to the 16th. Just four bogeys and two double bogeys corrupted his card. The low points being uncharacteristic extra putts on the 7th and 18th.

The next three players had to be separated by their final six scores having all posted 21 points on the inward run. Only one of Andi Howland’s three beautiful birdies was bagged on the back nine but his latest lesson with pro Charlie Simpson obviously paid off. He shot five over par for a nett 65 off the back tees.

Third placed Andy Dent (11) was as smooth swinging as ever. With three bogeys on each half Dent equalled McCord’s twelve pars and Howland’s nett 65 but, playing off the white tees, he only received a two stroke mixed tee amendment.

Taking fourth spot ‘Tic’ Connolly (19) played in his usual swashbuckling style keeping it on the short stuff often enough to scramble eight nett birdies and six nett pars. However, a four pointer nett eagle on the Road Hole mattered most.

With 42 points, the leader until lunchtime, long hitting Jon Wagstaffe (10) will rue his N/R on the short 16th. Until then he was just one over par thanks to birdies on the 4th and 14th. Subsequently, Wagstaffe finished bogey, bogey for fifth.

The final prize place went to Richard McAleer (23) with 92, nett 67, for 41 points after adjustment. With the lowest gross score of 70 Steven Boyd (1) went round in 22 fewer shots for his 41 points. Boyd’s only reward was a double helping from the two’s pot.

In the midweek Stableford Mike Horsthuis (8) carded a fabulous five pointer with a nifty nett hole-in-one on the par four 6th. His amazing one over par 73, nett 63, was worth 45 points; six ahead of Alex Holt (17) in second. Third placed Juan Costain (6) also amassed 39 points but was more front nine loaded.

This coming weekend members will be hoping that the only shanks will be the lamb ones being served-up by the Bay Green Restaurant for the captain’s annual dinner on Friday night. There may, however, be a few sore heads in evidence for Saturday’s Syd Ashworth Trophy.