Overreacting to an adverse forecast the fair-weather guys were conspicuous by their absence at Castletown Golf Club on Saturday. In accordance with the Rules of Golf unaccompanied  two balls were unable to support the Tower Insurance Turkey Trot FBBB. Consequently, even though the course was busy, without a marker, your efforts couldn’t count.

Back in January 2016 Messrs. Grace and Jones made their mark combining to reap the rewards. History repeated itself on Saturday as the two Marks fired five birdies, eight pars and four nett pars between them. They didn’t dovetail on the Road Hole but even so, off 85 percent of their handicaps they accumulated 47 points.

Second-placed Andrew Challenor and Mark Todd were just one point back on 46 although they needed a gorgeous gross 65 in order to do so. Challenor eagled the 15th and carded a superb six under gross par score over eight holes and, not to be outdone, Todd was one under gross on the other ten.

Challenor collected a double dollop from the two’s pot for his eagle and Peter Skelton, Dan Williams and the aforementioned Jones each pocketed a portion. Michael McCord and Mark Taylor made the final podium place with a six over gross par score for 43 points which included eight nett birdies and just one nett bogey.

On the previous Sunday Richard Foden, a social golfer who received his (24) handicap in the summer, had the best round of his life. Apart from an NR on the 4th Foden finished at 13 over par to win the Stableford with an outrageous 47 points. The new World Handicap System (WHS) was quick to catch up with Foden who is now off (12), which is probably a bit severe as it only had four cards to compare. Jack Snidal (13) came second on that Sunday with 38 points just ahead of Sam Crawford (6) on the same score.

On Friday 27th November the club is hosting the Beaujolais Nouveau AM-AM which is a fun open mixed competition which will benefit Hospice IOM. Registration is from 11.00am with a noon shotgun start. At the prize presentation a delicious coq au vin will be provided by the Bay Green Restaurant. Book online or contact Andi Howland on 822211 for more details. Please note, this event had originally been arranged for this Friday but has been rescheduled due to expected inclement weather. 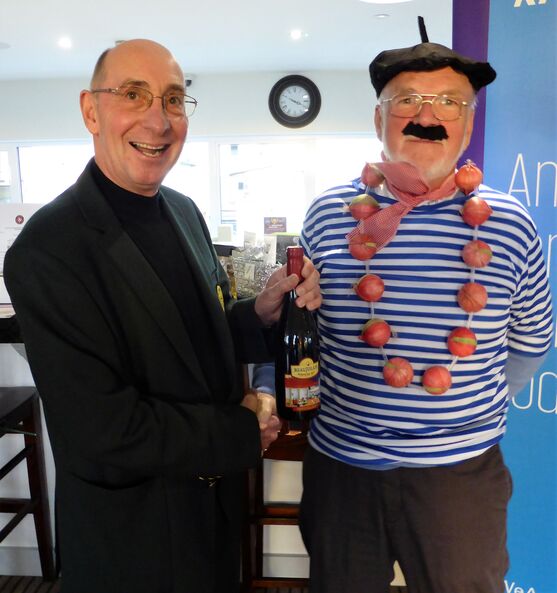 There might even be a spot prize for the best fancy dress which, in 2017, was won by Bob Adcock.

Saturday sees the second in the series of Tower Insurance sponsored Turkey Trots. So far over a hundred members have signed up for the Texas Scramble.