PYRAMID SHAMBLES BUT THE GOLF WAS GREAT

The weather was wild, but the golf was great and just one point separated the top three teams in the fifth and final Tower Insurance Turkey Trot at Castletown Golf Club on Saturday. It was a pyramid shambles competition which managed to mix a Texas Scramble start on each hole with an escalating AM-AM culminating with all four players needing to hole-out on the last three holes. A par score was 96 (9x2 x2pts + 6x3 x2pts + 3x4 x2pts).

Winning with 111 points after adjustment and countback Francis Doherty (4), Andy Saunders (7), Guy Pickard (6) and David Allan (11) started strongly and finished with a flourish. Doherty and Saunders both birdied two of the first four holes. Pickard and Allan added two birdies apiece on the back nine and the team totted up 18 points on the shortened 18th having netted two albatrosses and two eagles.

Also finishing with a score that gives a cricketer the creeps, Colin C Magee (9), Mel Todd (7), John Byrne (8) and Peter N Thomas (14) hoisted 111 for second place. Magee and Todd each eagled the 1st but Todd was on his own in adding a birdie on the 3rd. A devilish triple 6 meant just three points were purloined on the 11th, but they all nett eagled the last. 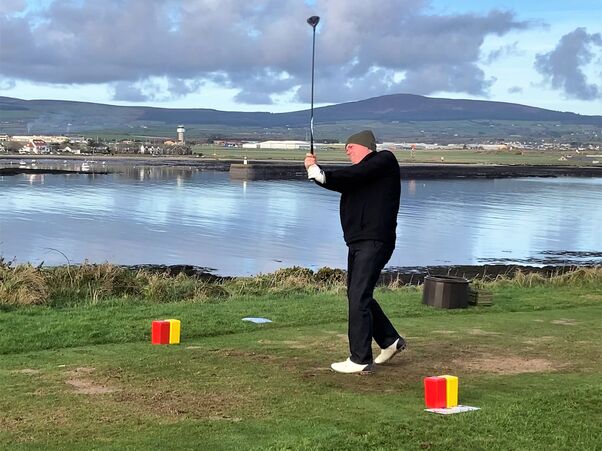 Ten beautiful birdies, probably robins, adorned the card of Richard Connolly (13) shown above, Simon Murray (5), Guy Murray (10) and Ross Mulligan (4). However, they could have done with more mulligans between the 9th and the 11th where 'Tic' was off and the Murrays failed to make a mint. Consequently, they had to settle for third spot on 110. 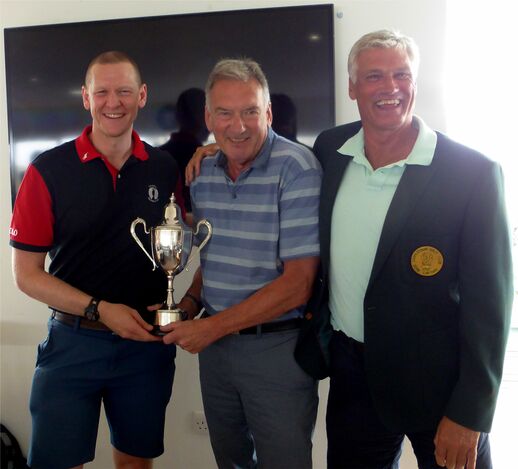 The aforementioned David Allan - shown above receiving the Castletown Cup back in 2018 - had also won the midweek mixed 9 hole Stableford. Three nett birdies and six nett pars produced 21 points, one ahead of midweek specialist Julian Brindle who unfortunately N/R’d the 2nd. Another of Saturday’s winning team came third on 19, so Andy Saunders should really be quid’s-in.

Over Christmas the clubhouse and Bay Green Restaurant will be closed on Friday, Saturday, and Sunday. The only organized golf between now and the new year will be the Wednesday midweek nine holers. Then the Winter League begins with the first round of the eclectic taking place on Saturday 2nd January.

“New year—a new chapter, new verse, or just the same old story? Ultimately, we write it. The choice is ours.”  So said Alex Morritt author of ‘Poetry in a time of Pestilence: Perspectives on a Pandemic’.

As for me, I’ll keep churning out the same old stuff, taking photos, trying to nett an albatross (as above), and counting my blessings that we live in the gem of God’s earth that makes us free as thy sweet mountain air.

Wishing you and yours compliments of the season.