A BUSY AND SUCCESSFUL YEAR CLOSES OUT AT CASTLETOWN GC.

There may not have been any organized competitions but the hard working ground-staff were still out and about. The course is in remarkable condition and this has been helped in part by the support work being undertaken by artisan members shown below enjoying a complimentary coffee and bacon bap. 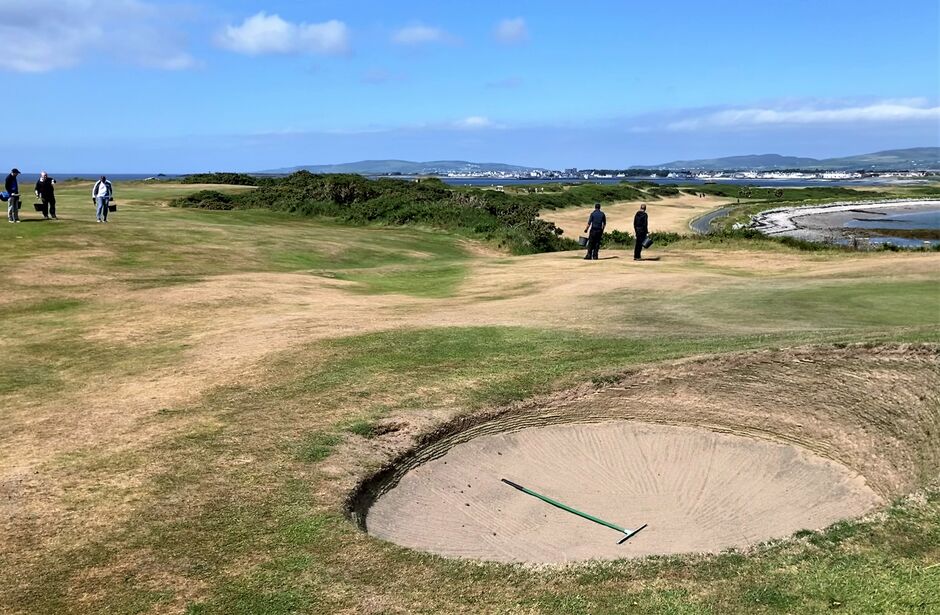 Filling divots and weeding greens may not be the most skillful or arduous tasks but, free of these time consuming tasks, the full-time staff can concentrate their efforts on more ambitious projects such as bunker reprofiling.

Despite Covid-19 it has been a busy and successful year. Here are a few headlines and apologies to those that I miss out or inadvertently offend:

In February Tom Gandy had a top 25 finish on the Sunshine Tour in South Africa and made his debut on the European Tour. Tim Callow was crowned champion of the 2019/20 Winter Eclectic in March. Lockdown followed by a protracted period of restricted golf caused me to remember that patience is a virtue. Our new 18th fairway was eventually opened in late May by our captains Graham Harris and Maryann Dunn. They both posted triple bogeys, which I cheekily reported as, ‘A fairway to seven – a new normal’.

New course records have since been set. The club champion Lynda Simpson has so far shot a 77, Michael Charmer reset the yellow tee’s mark at 70, Andrew Challenor has posted a 68 off the whites which has been matched by Daryl Callister off the black tees.

A victory in the Standard Bank Stableford helped hoist Steven Boyd to back-to-back Golfer of the Year awards. Jon Corke became our club champion to add to his marvelous Island Championship victory earlier in July.

The Vice Captain's Trophy went to Brian Kelly in September which also saw the Leighton Cup landed by Jane Holt. Bryan McMahon was the worthy winner of the AON Trophy and in October the Neville Peterson Memorial Stableford went to occasional golfer Johan Bondegreen in only his fifth finish over 13 months. Canaccord Genuity sponsored their Stableford and Michael McCord went on to win with 43 points.

A new year with fresh challenges will soon be upon us and the Winter League begins with the first round of the eclectic taking place on Saturday 2nd January.