*THE REPORT BELOW WAS POSTED PRIOR TO THE GOVERNMENT'S DECISION TO IMPLEMENT LOCKDOWN WITH EFFECT FROM MIDNIGHT 06/01/21.

HENCE, NEITHER THE CAPTAINS SOCIETY AGM WILL TAKE PLACE ON FRIDAY AND NOR WILL THIS SATURDAY'S COMPETITION.

With funds being set aside to reward the series winner only five prizes were up for grabs in the first round of the Winter League Eclectic at Castletown Golf Club on Saturday. There may have been frost and black ice across the island, but 125 entrants enjoyed the sunny south and practically perfect playing conditions. Even after discounting the shortened 18th - for qualifying competition purposes - nearly a quarter of the field were able to meet or beat their handicap.

Taking top prize with 40 points David Kay (26) was quick to praise his new TaylorMade M6 driver and matching fairway woods. Having battled against him in our side-bet 4BBB I can certainly attest that, as advertised, ‘the twist face technology provided straight distance and maximum forgiveness’. Indeed, Kay’s only blobs came from chipping into, but not out of, a bunker on the 9th and frustratingly failing to find his ball after a delightful drive on the 14th.

Paul Reid (10) started with a birdie and added another for a four pointer on the Road Hole. Turning with 24 points Reid’s remarkable run faded from the 13th with five back-to-back bogeys. But, finishing at four over par, he still stepped in with 39 points for second spot.

Three birdies were balanced out by bogeys in Andrew Gerrard’s great level par performance for 38 points. Tapping in his second lucrative two on the 13th Gerrard (5) completed the inward leg in one under par to take third place on countback.

Also shooting a 38 Ashley Chase (18) started out with a cluster of three pointers and birdied the 8th for his share from the two’s pot. Unfortunately, an ugly eight on the 12th caused Chase to kiss goodbye to his countback challenge.

It is particularly pleasing to report that the fifth and final prize went to former club treasurer Ian Hodgkinson (15) who birdied the 9th for four of his 37 points having banked seven gross pars on the way.

The nine hole midweek mixed Stableford is proving to be popular. 37 players participated in the last one of 2020. The winner with 23 points, Stuart Butler (9), built on his birdie start by adding two pars and four nett pars. There was a slight slip-up on the Road Hole but then Butler served-up his second four pointer with a profitable two on the 8th.

One point behind in second spot Stephen Fisk (8) also carded two birdies. Unfortunately, he had opened with a bogey worth only one point as was his dastardly double bogey on the 7th. Alex Holt (7) completed the course in just four over par to finish third on 21 points. Former captain Julie Amphlett (10) was the first lady home on 17 points. 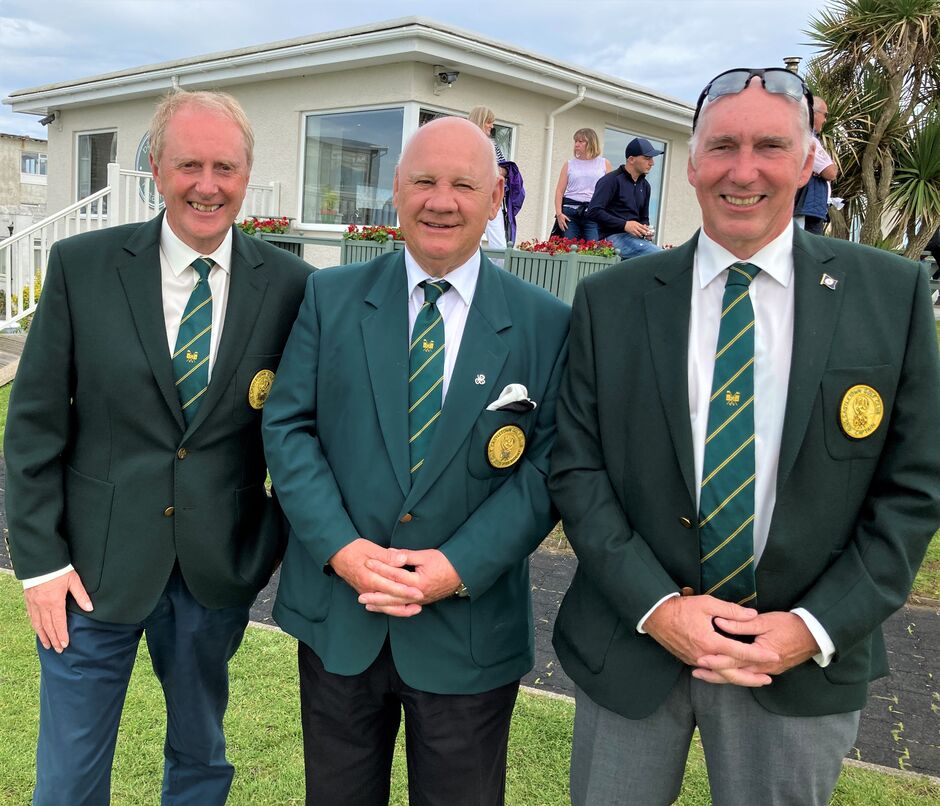 *This Friday the AGM of The Captains Golf Society takes place at 7pm at Peel GC and it will be followed by a buffet. No doubt the society's popular captain, Jack Yardley - shown above with CGC past captains Graham Harris and Geoff Sugden, who will also be in attendance - will be assured of good support from clubs around the island.

*Saturday sees the second round of the Winter League. The eclectic is almost fully booked although there are usually late cancellations, so keep looking online if you find yourself free.